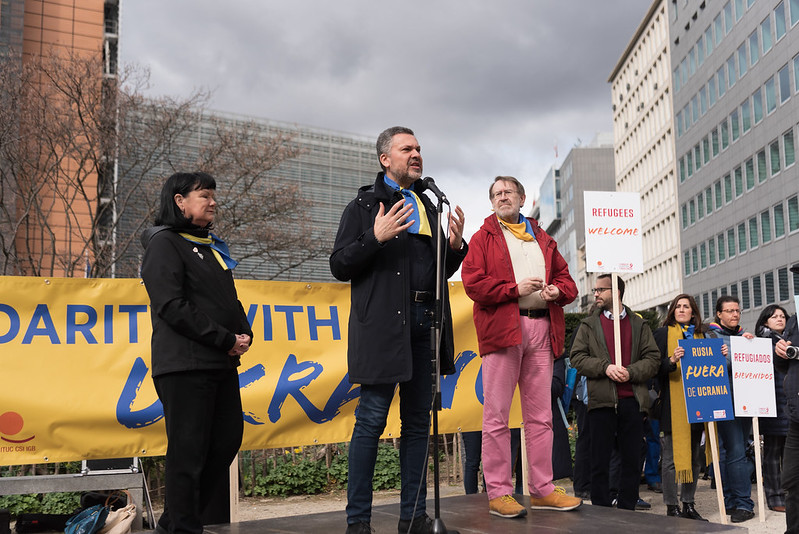 The ETUC reiterates its condemnation of the invasion of a sovereign nation, in breach of international law and calls on Russia to respect Ukrainian territorial integrity, demands the immediate cessation of military operations, insists that Russian troops leave the country, and calls for dialogue and talks for peace be started.

The ETUC expresses its solidarity with all people, workers, and trade unions of Ukraine.

The pursuit of peace and democracy is a fundamental value of the trade union movement and an essential condition to secure safety, social justice and worker’s and human rights.

The ETUC supports all political and diplomatic initiatives and sanctions to secure peace and calls for humanitarian aid for the Ukrainian population in Ukraine and to welcome and support refugees in Europe.

ETUC denounces and condemns the repression in Russia against those who oppose the war in Ukraine and pledges to support Russian trade unions, workers, activists and pacifists who non-violently oppose the war, and expresses solidarity with the Russian and Belarussian people hit by the repercussions of the sanctions or by forms of discrimination for a war they are not responsible for.

The ETUC demands international institutions, and particularly the European Union and Member States to:

The ETUC is constantly in touch with Ukrainian trade unions to ensure solidarity and support, and in coordination with its affiliates, as well as with the ITUC and PERC, is ready to:

In order to provide financial aid to secure humanitarian assistance to the Ukrainian population via the Ukrainian trade unions, and to support Ukrainian refugees who are given protection in EU Member States and in the countries of the region:

The ETUC Secretariat will report in detail to the Steering and Executive Committees regarding all financial support and on how it is used by the beneficiaries, making sure it goes exclusively to humanitarian aid.  An assessment of the first payments made will be presented to the Steering Committee meeting in April.