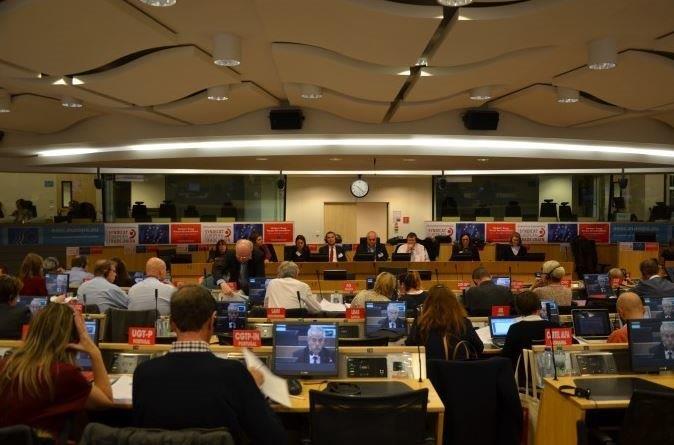 Strategy for more democracy at work

Democracy at work / workers’ participation isn’t high on the European political agenda despite its potential to contribute to an urgently needed increase of a visible and tangible Social Europe. A European approach to Democracy at work can directly improve working life, collective labour rights and concrete participation of workers in society and the economy. It also contributes to economic success, employment stability and good corporate governance. In view of the European elections and the ETUC Congress (both May 2019) the ETUC proposes a strategy to go on the offensive for more democracy at work. The ETUC will make its positions clearly visible for a broader public. The precondition for being successful in this, is to have the active and sustainable support of the ETUC affiliates. Support in the European institutions is currently limited or even non-existent. No political party is proactively putting ‘more democracy at work’ on its agenda. But by generating enough pressure to enhance the discussion about democracy at work, more and more effective support will be won in the policy-making and legislative arenas.

The idea that democracy cannot end at the workplace is a fundamental part of the European Social Model. In addition to social dialogue and collective bargaining, freedom of association, unions, workers, and their representatives can wield important influence within their work places via different instruments of workers’ participation. These instruments all serve to enhance democracy at work and range from information and consultation rights at work, to cross-border information and consultation in European multinationals, to the representation of the workforce in governance at top company level.

The need to empower workers – in private companies and especially in public services, where in some countries participation rights are weak or non-existent - to express their views and enforce their rights collectively in Europe is all too often ignored in current European debates. Most of working-age Europe is in work. The ETUC is convinced that the key to a more social Europe, to a Europe of citizens able and willing to invest in a shared future, lies in the exercise of stronger democracy at work, stronger trade union and collective bargaining rights which is key to a fair and inclusive Social Europe for all citizens.

As European integration is deepening, workers’ rights should deepen as well. However, democracy at work is eroded by e.g. increasing centralisation of company decision-making in all areas, by massive influence on law interpretation, by increased concealment of real ownership etc. This widening gap can be partly closed by European legislation on workers’ information, consultation and participation. But obstacles are found in both the design of legislation and in its implementation. Of course, a more democratised workplace must go hand in hand with a more democratised society in general. At European level the introduction of a Social Progress Protocol could support and monitor the development of stronger participation rights. Participation at all levels by workers and working citizens will contribute to a stronger sense of ownership for the whole of society.

During the decade of the Barroso-led European Commission, the ETUC had to fight several defensive struggles (i.e. Commission proposals for company law).

Since the start of the Juncker Commission, the social dimension has been encouraged again, but even in the European Pillar for Social Rights the issue of workers’ participation was not mentioned in a forward-looking way[1]. All workers[2], independent of their employer, should enjoy EU-level protection for their information, consultation and board-level representation rights. Democracy should not stop at the factory gates. Workers should not be objects or victims of global market rules. ‘Social Europe’ has been undermined in recent years by repeated legal judgements that prioritise competition within the Single Market over workers’ rights and protections.

Some Court cases (such as ‘Polbud’) might well jeopardise workers’ participation if the Commission remains passive and abstains from legislative action. The need for strengthening collective rights is obvious and overdue.

Since 2016 the ETUC has been asking for a new EU architecture for information, consultation and board-level representation[3]. In 2017, the ETUC put forward 10 demands for the revision of the Directive on European Works Councils[4]. The new architecture must ensure fair information and consultation of workers, anticipation and management of restructuring[5]. The Commission refused to take any legal action related to these demands. However, a new proposal facilitating company mobility has been announced in early 2018 which again may jeopardise workers’ participation instead of using the momentum to introduce an ambitious level of improved participation rights for all European workers. In view of the upcoming Company law package, the ETUC underlines that the real and the administrative seat of a company should always be the same[6].

The ETUC proposes a strategy and timeline to strengthen workers’ participation against the background of a general demand for more democracy at work/citizenship at work/industrial democracy, between now and the ETUC Congress and the EP elections in Spring 2019.

The objective is to increase the visibility of the topic, thanks to the support of ETUC affiliates.

The activity is focussed on all forms of worker’s participation as expressions of a broad concept of democracy at work which is the necessary counterpart and complement of political democracy.

Instruments to be strengthened include information and consultation rights at local level, effective Europeanisation of rights to information and consultation at the transnational company level via European Works Councils and SE Works Councils and supporting the participation of workers’ representatives on company boards (i.e. through the ETUC workers’ participation ‘escalator’[7] proposal). ETUC affiliates are encouraged, to participate actively while adapting the activities to national circumstances and practices.

Many of the building blocks are already present in EU and national legislation, but they need to be better linked to each other. They must be protected from being bulldozed by transnational business interests or diluted or removed in the name of market liberalisation, austerity or misplaced ideas about lean regulation. The performance of EU Member States like Sweden, Denmark, Germany and Austria demonstrates that extending workers’ participation rights in companies and in administration is not an obstacle to a productive and profitable economy. The active involvement of trade unionists and workers’ representatives contributes to economic success and employment stability.

More democracy at work can and must be linked to the narrative of those ‘left behind’. Who would put faith in a society where the rights of companies and business, employers and administrations are guaranteed while working people face permanent insecurity about their legal rights? When right-wing populism and extremism are on the rise, democracy is on the decline. A link exists between democracy at work and the political risk of the development of large groups of people who are ‘left behind’ by economic growth and welfare distribution. Neither the Trump or Chinese models, nor retreat behind national borders (‘Brexit’), offer a solution to the growing number of frustrated citizens. Only direct participation in decision-making and a living democracy can pave the way forward. The lack of workplace democracy weakens support for the European project by reinforcing an economy in which ordinary working people do not see their interests protected or promoted at either national or EU level. A huge danger to more democratic industrial relations comes from the rapid growth of digital workers and employees in the platform economy. Democracy at work is and remains key to ensure fair digitalisation and fair digital work.

During the preparation for the EP elections, concrete and practical examples and important contributions to existing forms of democracy at work and workers’ participation need to be named and advocated. Attention must be paid to current problems and difficulties in practice as well as to the range of solutions put forward by the ETUC and its affiliates. Target audiences should be both new EP candidates as well as candidates standing for re-election: They all must be lobbied and won over to the cause of democracy at work!

The network of EWC members in Europe needs to be mobilised (via all ETUC affiliates) to contact local candidates in the EP elections, to persuade them to integrate the need for stronger European workers’ rights in their election campaigns. This would provide a real-life example of how workers and their representations are seeking to build Europe from the grass-roots up.

Clear and understandable public messages must be put forward/worked with.

Depending on the national context and tradition, ‘naming and shaming’ lack of respect for workers’ rights and exposing unfair restructuring is a key tool to raise awareness in the media. Positive examples of good cooperation with management to improve governance and decision–making and contributing to the good of the company and society should also be promoted.

The number of quality EWCs must be raised. The ability of existing EWCs to fulfil their role must also be improved. Enabling EWCs to effectively express the ‘workers’ voice’ requires investment in capacity-building, centred on training and expertise on one side and on strengthening the broader trade union support network available for EWCs on the other side. This needs a joint effort by national and European educational institutions like the ETUI. It is worth mentioning that the more than 21,000 EWC members have seats in at least 54 countries.

The ETUC believes that gender equality and diversity in the boardroom of companies is a key democratic principle with positive economic side effects. The principle of gender equality should however be kept separate from that of diversity: women are neither a group nor a minority, but more than half of the world’s population, not to mention 45% of the European workforce.

The ‘ETUC Position on a European Labour Authority - ensuring fairness for workers in the single market’ underlines: “In order to carry out its transnational activities, the ELA would need to rely on efficient tools including a European register of companies carrying out transnational activities. Such a register should contain updated information on the countries in which the company operates, the nature of the activities in each Member State, the size and composition of the workforce, and the turnover in each Member State.

This information is essential to track down letterbox arrangements, including abusive use of temporary work agencies, and to support the implementation of EU labour law Directives, such as the European Works Council and the SE Directives.”[9]

[1] Point 8 only repeats the current state of play: ‘Workers or their representatives have the right to be informed and consulted in good time on matters relevant to them, in particular on the transfer, restructuring and merger of undertakings and on collective redundancies.’

[2] ‘Workers or their representatives must, at the appropriate levels, be guaranteed information and consultation in good time in the cases and under the conditions provided for by Union law and national laws and practices. Everyone is equal before the law.’ (EU Charter of Fundamental Rights, Article 27 - Workers' right to information and consultation within the undertaking)

[6] ETUC position paper: ETUC demands in view of the upcoming company law package https://www.etuc.org/documents/etuc-position-paper-etuc-demands-view-upcoming-company-law-package# A mandatory information and consultation process is needed, in due time, as soon as a company intends to transfer its seat. The content of this consultation process should deal with the reasons for the transfer, the real economic activity of the proposed new seat, the consequences at social and tax level. The Member State of departure must be able to prevent a proposed transfer of seat when there is no real transfer of economic activity.

[8] Thanks to national provisions there are at least 16,000 ‘worker directors’ (workers’ representatives in company boardrooms), whereas the SE Directive has added only 240 since its adoption in 2001.

[9] Adopted at the Executive Committee Meeting of 13-14 December 2017: https://www.etuc.org/documents/etuc-position-european-labour-authority-ensuring-fairness-workers-single-market#.