ETUC Resolution: The EU has to act now to improve occupational health and safety 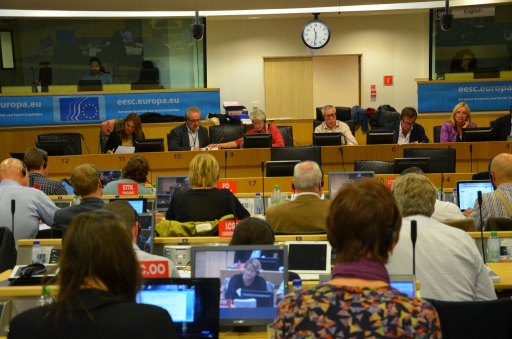 Adopted by the Executive Committee of 2-3 December 2014

The new President of the European Commission (EC) has recognised a lack of social fairness in European policies and promised a new approach in order to restore citizens’ confidence. Workers’ health and safety is one of the areas where action is crucial and urgent. The previous Commission undermined health and safety on the grounds of reducing administrative burdens and submitted occupational health and safety (OSH) directives to the REFIT exercise. Data show that working conditions in Europe are deteriorating and workers are dying, and yet the results of this exercise will not be ready until the end of 2016.

The European Parliament (EP), the European Trade Union Confederation (ETUC) - in the resolutions adopted in 2011 and 2013 - and the tripartite Advisory Committee on Safety and Health at Work to the European Commission (ACSHW) called on the Commission to issue a European strategy that would set more measurable goals, binding timetables and a periodic evaluation. They also called for better and stronger Labour Inspectorates and concrete measures to stop the rise in psychosocial risks at the workplace. The Framework on Health and Safety at work 2014-2020, of June 2014, ignored the recommendations from the Parliament, the ETUC’s demands and the advice of the ACSHW, which all called for a strong OSH strategy for Europe.

The ETUC agrees that more efforts on OSH are required. However, the ETUC is of the opinion that the EC Strategic Framework 2014-2020 is not about better protecting workers against accidents at work and occupational diseases, but rather about breaking down European legislation in a bid to resolve the economic crisis, and offers no real action. The ETUC expresses its deep concern about the deterioration of working conditions and the increasing inequalities between and within Member States (MSs) in that field.

The Commission’s line up to now has been to avoid making any legislative proposal in the area of safety and health until the evaluation of the entire body of EU OSH legislation has been completed, in the framework of the REFIT exercise. Several legislative proposals, including those supported by both employers and workers (e.g. the hairdressers’ agreement, proposals on carcinogens and mutagenic substances, European agreements on inland shipping…) have been blocked as a result.

Therefore, it is now the new Commission’s responsibility to develop a proper strategy, in order to launch real action aimed at protecting the lives and health of workers in Europe. This action, however, needs to be developed through a tripartite dialogue with the new European Commission, to boost collaboration between employers and workers in SMEs, support the role and knowledge of the labour inspectorate and safety reps as well as the following urgent issues.

Providing clear guidelines to Member States for developing national OSH strategies – in cooperation with the Social Partners – that can be monitored and enforced by the Labour Inspectorate, will definitely help to implement and consolidate health and safety rules promptly in Europe, as the EC Strategic Framework outlines, and avoid social dumping in the EU. Nevertheless, this should not be a substitute for legislative action in the fields where EU legislation has a strong added value.

This is particularly the case in major areas of concern: musculoskeletal disorders, the prevention of occupational cancers, the protection of reproductive health against toxic substances, chemical risks including new materials and chemical disrupters of the hormone system, as well as gender issues arising from different exposures, prevention strategies, diagnosis and recognition of occupational diseases.

The ETUC recalls the provision of article 153 of the Lisbon Treaty: in order to achieve a harmonisation of working conditions, the basic tool for EU action is the adoption of directives with provisions that level up European standards which will have a positive impact on the sustainability of work.

Specific attention and concrete policy action should be directed to precarious work for both men and women, which increases psychosocial risk factors that lead to significant adverse effects on human health including high risks of cardiovascular diseases and premature mortality. The gender dimension has to be taken into account in conducting risk assessments. In this regard, the knowledge and activities of safety reps are essential to foster better working conditions, and their role should be better supported.

The EC needs to take on the problem of tackling psychosocial risks, which is of great importance to all workers: men and women. The potential consequences of psychosocial burdens (pressure, isolation and loss of social support, new communication technologies, flexible working time, impossible deadlines, restructuring…) include cardiovascular diseases, musculoskeletal disorders, dermatologic problems, suicide, relationship problems with colleagues, family and social networks, and increased risk of violence, with consequences for both physical and mental health. In the medium term, enterprises suffer from absenteeism due to lengthy illnesses, and turn-over and productivity are damaged.

All these issues were not taken into account by the previous European Commission, which failed fully to include democratic principles in the drafting of occupational health and safety policy in Europe, infringing fundamental European Treaties.

The ETUC calls on the new Commission to put forward a substantial strategy for occupational health and safety in Europe. Data show that working conditions in Europe are deteriorating and workers are dying every day. In this perspective the futile and endless discussions on reducing administrative burdens by cutting back health and safety legislation must stop. ‘Refitting’ legislation means formulating the best possible rules to address new and emerging risks and protect workers’ health. It means reformulating and transforming existing legislation into a modern, up-to-date framework. Therefore, the following four concrete actions are needed urgently in Europe:

The Executive Committee agrees to organise, in coordination with the International Trade Union Confederation (ITUC), 28 April 2015 Worker Memorial Day activities in order to emphasise our demands. ETUC affiliates will be actively involved in these activities, and in lobbying their governments.