ETUC position on the Common Consolidated Corporate Tax Base (CCCTB) 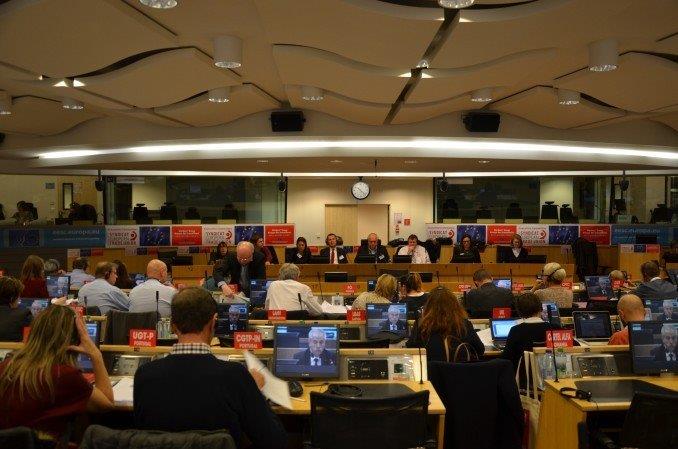 Adopted at the Executive Committee Meeting of 14-15 December 2016

The ETUC welcomes the European Commission’s initiative to relaunch the Common Consolidated Corporate Tax Base (CCCTB) proposal. Enhanced convergence of tax bases within the European Union is needed in order to build more coordinated economic policies and fight tax avoidance. However, given that tax avoidance uses both tax base and tax rate differentials, the ETUC reiterates its call for the setting of a minimum corporate tax rate of 25% in Europe, to ensure that companies pay their fair share of tax where profits are generated. Still, the ETUC considers that the proposed threshold for mandatorily entering the CCCTB scheme is too high and should be set in accordance with the accounting directives.

In March 2011, the Commission proposed a Directive for a Common Consolidated Corporate Tax Base (CCCTB). The proposal, which is still pending in Council, aims to provide companies with a single set of corporate tax rules for doing business across the internal market. Such a framework is designed to simplify the EU’s corporate tax framework and to reduce opportunities for multinational companies to avoid corporate tax. It is estimated that the CCCTB could save businesses across the EU € 0.7 billion per year in compliance costs and would reduce the costs of cross-border expansion by around 62%.

A company would have to comply with just one EU-wide system for computing its taxable income, rather than different rules in each Member State in which it operates. Those profits would then be apportioned among countries, based on the estimated level of real economic activity taking place in that country (computed on the basis of the weighted ratio of sales, payroll, number of employees and assets in each country). Member States would then be free to choose what tax rate to apply to those apportioned profits. In this respect, the CCCTB framework does not aim for a convergence in tax rates within the European Union.

The discussions in Council since 2011 have revealed that it would be unlikely for the CCCTB proposal, described as being a “very ambitious” project, to be adopted unless this were approached in stages.

The new proposals from the European Commission were presented in October 2016. They focus not only on helping business, but also on countering tax avoidance. They accordingly contain provisions intended to reflect the measures in the Anti-Tax Avoidance Directive (ATAD), which was adopted in July 2016.

The shortfall at stake

Under this new CCTB/CCCTB scheme, multinational companies with a consolidated group revenue exceeding €750 million during the financial year preceding the relevant financial year will be mandatorily expected to produce revenue figures in accordance with the CCTB requirements. That tax return would adjust the European profits as declared by the multinational company for accounting purposes in accordance with a commonly agreed series of non-taxable revenues and disallowable expenses. Then, when the CCCTB is introduced, the resulting CCTB calculated figure will be subject to an apportionment between Member States based on where the sales, employees and capital base of the multinationals are located.

However, the CCCTB tax base is not based upon tax adjustment of the consolidated financial statements of multinational companies to which the tax rules will apply and from which non-EU transactions will be eliminated. It will instead require that the accounts of each of the separate entities that make up the group, which are themselves either resident in or have permanent establishments in the EU, be adjusted in accordance with the rules laid down in the new CCTB and then have their results aggregated to create a CCCTB tax base.

For the tax base, on which it is prepared, to be meaningful, there must be a consistent accounting base in use within the group in question. This assumption is critical if equality of treatment in taxation is to be ensured and tax arbitrage is not to be replaced with accounting arbitrage. Unfortunately, the EU does not have that consistent accounting base and there is no requirement for a group to use International Financial Reporting Standards (IFRS) in all subsidiaries. The alternative Generally Accepted Accounting Principles (GAAP) available in the EU offer substantial differences in the recognition and valuation of critical revenues and expenses. The consequence is that there may be double or non-taxation of some transactions depending on the various GAAPs a group may use in the calculation of its CCCTB tax base, even if it applies the CCTB consistently.2

If differing GAAPs allowing differing accounting treatments exist in the EU and if IFRS allows different capital maintenance concepts and so varying income recognition bases, then its relevance for taxation also has to be questioned. This could also lead to legal uncertainty.

In this respect, the opportunity for tax avoidance through accounting arbitrage will still exist, under both the CCTB and CCCTB, and the prevention of tax avoidance will be very dependent on the existence and use of a General Anti-Avoidance Rule (GAAR). Without this, multinationals could, for example, change their behaviour and location of assets and employees (as well as the terms on which they are acquired or engaged) to distort the profit distribution function to minimise taxes.

Based on these examples, it becomes clear that even though the CCTB and CCCTB provide quite comprehensive tax rules, they do not seem to be consistent and sophisticated enough in themselves to prevent tax abuse or to provide for sufficient grounds for unanimous interpretation by the courts, and so reference would be made to national interpretations, thus creating legal uncertainty.

Existing rules make it hard or impossible to set off gains and losses in different countries, which is a significant problem for multinational companies. In order to compensate for the absence of the benefits of cross-border consolidation during the first step, the CCTB proposal provides for temporary loss relief with recapture. This means that losses incurred by a direct group subsidiary or permanent establishment in another Member State can be deducted by the parent company, but will be recaptured when subsequent profits are made, or otherwise after five years.

When the CCTB process is completed, which is set for the end of the year 2018, it is planned that the CCCTB, with the consolidation aspect, should be implemented. Only at this time would the use of transfer mispricing on intra-group purchasing within the EU be eliminated. This means that while tax avoidance through accounting codes arbitrage will still be possible, profit shifting through transfer mispricing will not be eliminated before the consolidation phase is implemented.

The main limitation of the proposal is that the consolidated accounts to be filed need only include the members of the corporate group resident in participating states. This deprives the CCCTB of a key advantage of the unitary approach, since it allows multinational companies to exclude intermediary entities which they use for tax avoidance, including those located in tax havens. This problem would still have to be dealt with by the usual range of anti-avoidance measures including rules on transfer pricing, controlled foreign corporations, and a general anti-avoidance principle. The CCCTB embraces these.

In addition, the Commission has now proposed an alternative to patent boxes.3 The proposal would not only allow multinational corporations to deduct all expenses related to research and development, but would award corporations large additional tax deductions, depending on the amount they spend on research and development. For expenses of up to € 20 million, the Commission proposes to award corporations an extra tax deduction of 50% of the amount spent. This is a new tax incentive, which will allow multinational corporations to deduct large amounts of profits from their tax base. Again, there may be opportunities for tax abuse in this mechanism, not least by over-stating R&D costs.

It is important that Member States ensure their tax administrations have adequate resources to perform their functions.

·         The ETUC welcomes the mandatory aspect of the CCTB and the CCCTB but finds the threshold of € 750 million too high; we therefore demand that the threshold be set at a maximum of € 40 million, in accordance with the accounting directives.

·         As stated in the ETUC’s reply to the consultation on the re-launch of the Common Consolidated Corporate Tax Base, the two-step approach will inevitably lead to new loopholes. The ETUC urges the rapid implementation of the consolidated aspect of the package (CCCTB), beginning as soon as January 2019.

·         The ETUC demands full global transparency and the detailed publication of Country-by-Country annual reports in order for all eligible companies to make the CCCTB framework and Country-by-Country reports coherent for tax purposes.

·         The ETUC demands that all members of a corporation be incorporated in the common corporate consolidated tax base and not just those in the European Union.

·         The ETUC is demanding a convergence of accounting rules if the CCCTB is to be an added-value.

·         For the CCCTB to be effective, the ETUC believes it is important to introduce a minimum tax rate of 25%.

2  “a CCCTB makes little sense without standardisation, whether it is based upon an external set of conventions such as IFRS, or an internal set of tax provisions. So, whilst MS GAAP must inevitably be the starting point, standardisation has to be the end point.” Judith Freedman & Graeme Macdonald (2008), “The tax base for CCCTB: the role of principles”, Oxford University Centre for Business Taxation, WP 08/07. See also, European Commission, Common Consolidated Corporate Tax Base Working Group (CCCTB WG), CCCTB/WP057/doc/en, 26 July 2007.

3 This a special regime designed to encourage companies to establish an entity in some Member States thereby allowing them to apply a preferential rate of corporation tax to profits that may be attributed to patents.