Appeal "Make money on value, not on health" #WhateverItTakes 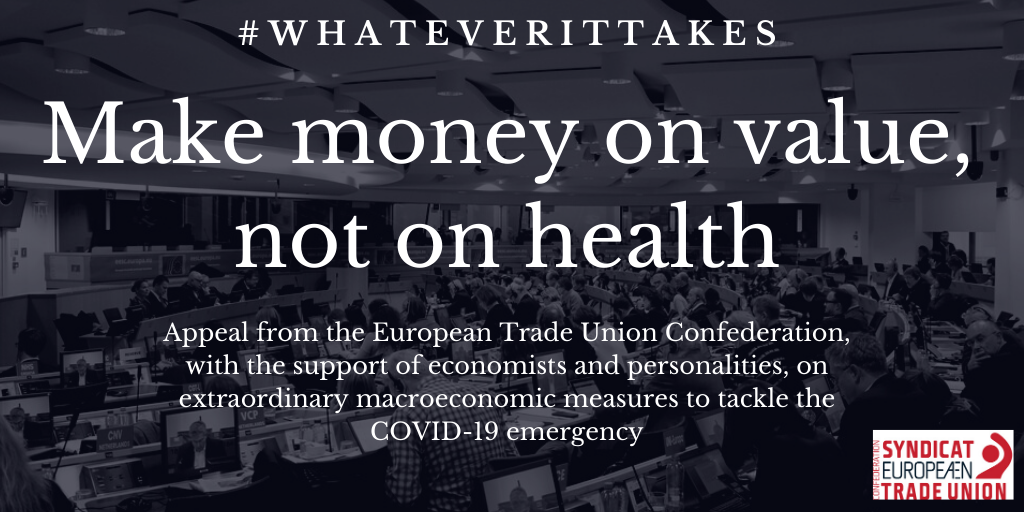 Make money on value, not on health

Appeal from the European Trade Union Confederation, with the support of economists and personalities, on extraordinary macroeconomic measures to tackle the COVID-19 emergency

We appeal to European Institutions and governments with a sense of urgency, our population is suffocating from the Corona COVID-19 virus, physically and economically. Nobody should have to choose between protecting themselves and their loved ones, or keeping their job and income, potentially putting themselves and others at risk.

We need to act and to act bold. We fear that the tools and funds put now on the table by governments and European Union institutions will not be enough. The full use of the flexibility of the Stability and Growth Pact will be like drops in the ocean, if not accompanied by additional measures. The emergency clause of the Fiscal Compact must be activated.

We urge all financial institutions not to profit from this unprecedented health emergency and prevent an economic shock. Therefore, we recommend the rapid implementation of the following measures:

We must make sure that the emergency measures that should be put in place now, will be followed by more structural and sound measures to promote investment and sustainable economic development. We must take advantage of the current Review of the Economic Governance in the European Union recently launched by the European Commission: a complete revision of the European fiscal framework is absolutely needed, on sound economic principles.

Public services and public service workers are doing an incredible job in protecting and caring for the population during this unprecedented crisis, and now is the time to ensure that they can be financed sustainably in the future by clamping down on tax avoidance and evasion. Congratulations are welcomed, financing is needed.

Clearly, more than ever, fiscal transfers between Member States by one means or another, and a European central fiscal capacity issuing a safe asset, are required at this time, but it seems that such goals are not yet achievable.

Ultimately, this is about democratic control of our financial system and taking the necessary measures to save people’s livelihoods and economic activity. Acting fast and acting together is the only effective answer to a crisis that affects us all.

We must act together if we do not want all this to degenerate into petty and divisive nationalism. We must act together because we face the same threat, and the virus that does not stop at borders. Let’s act in solidarity, for the freedom of the people, and our common goods. Together we are stronger.

Gabrielle Siry, Specialist in Financial regulation and spokeperson of the Parti socialiste, France

Sam Hägglund, Member of the European Economic and Social Committee

Eric Andrieu, MEP, Group of the Progressive Alliance of Socialists and Democrats in the European Parliament, Parti socialiste, France

Pierre Larrouturou, MEP, Group of the Progressive Alliance of Socialists and Democrats in the European Parliament, Nouvelle Donne, France

Brando Benifei, MEP, Group of the Progressive Alliance of Socialists and Democrats in the European Parliament, Europe, Italy

Maurice Braud, Member of the National Board Parti socialiste, member of the European Council on Foreign Relations, Administrator of CIFE, vice-president of the University Office of Socialist Research

Pierfrancesco Majorino, MEP, Group of the Progressive Alliance of Socialists and Democrats in the European Parliament - Partito Democratico, Italy

Zeljko Buric, President of Trade Union of Telecommunication of Montenegro

Üllar Kallas, Chairman of the board, Transport and Road Workers' Trade Union, Estonia