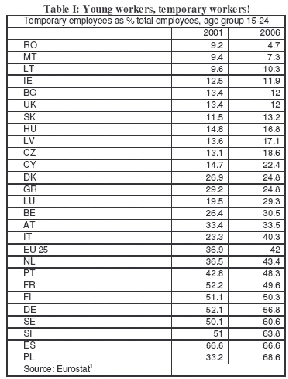 The ETUC has outlined five basic principles for decent work:

- An end to precarious jobs, which are not only bad for workers but also damage the labour market and the economy. They undermine working conditions and health and safety, generate poverty wages and damage social cohesion;
- Better work organisation, to create environments where workers are fully informed and consulted, able to balance the demands of work and home life, and have opportunities for lifelong learning to boost skills and qualifications;
- Strong employment protection legislation, which far from being an obstacle to a dynamic labour market can foster investment in human capital and innovation;
- Social welfare systems that offer security to the 14 million Europeans who change jobs each year;
- Social dialogue and collective bargaining, and the full involvement of the social partners in decisions on labour market reform.

Many Europeans don't have decent work

People want decent work. The European Foundation for the Improvement of Living and Working Conditions, in its Fourth European Working Conditions Survey, found that job security is the most important factor in determining job satisfaction. Regular working hours are also important for quality of life and balancing professional and family responsibilities: 40% of workers on long hours are dissatisfied with their situation.

On average, 22% of European workers (35 million people) are on non-standard contracts, with the highest percentages in Poland and Bulgaria. Across Europe, almost half of young people have temporary contracts, with particularly high proportions in Spain and Poland (up from 33% in 2001 to 69% in 2006) – see table 1. Over half of fixed-term contract workers say they would rather have a permanent job, while some 8 million part-timers are unable to find full-time work.

More than 70% of employees say they have received no training from their employer – rising to over 90% in the newer EU Member States – and this proportion has grown over the last five years - see table II.

The EU Joint Employment Report 2006[[Published in February 2007]] confirms that adult participation in lifelong learning has stagnated or fallen in 20 EU Member States, and that measures to combine work and family life are still inadequate.

The growth in some EU Member States of so-called 'McJobs' - unstimulating, low-paid and with few prospects – serves to attract illegal and unqualified workers and reinforce their exploitation. Strong regulation backed up by workplace inspection systems is needed to identify and penalise bad employers, and remove unfair competition that undermines well-run businesses.

In the EU, there are over 150,000 deaths each year from work-related accidents (8,900) or diseases (142,000)[Source: <em>[Decent work - Safe work, ILO 2005]]. The most frequent work-related ailments are backache (29%), muscular pains (28%), fatigue and stress (27%), suffered mainly by workers in the agriculture, health and education, and construction sectors[Source: <em>[Fourth European Working Conditions Survey]]. Some 340 million days are lost per year due to health problems caused by work[Source: <em>[Third European Working Conditions Survey]].

In 2000, the EU's Lisbon Strategy promised to make Europe “the most competitive and dynamic knowledge-based economy in the world” by 2010, with sustainable growth, more and better jobs and social cohesion. The ETUC backed the strategy, believing it offered a balanced approach to workers' rights and economic growth. However in the intervening years that balance has been upset, with growth and competitiveness taking precedence over social progress and decent work.

Recent debate has focused on reforming the EU labour market through 'flexicurity'. The European Commission published a Communication on this issue in June 2007.

The ETUC is not opposed to flexibility in the workplace, but this must operate for the benefit of workers as well as employers, offering wider opportunities for reconciling work and family life, giving people more control over their working lives, enabling workers to acquire new skills and adapt to new technologies, and backed by strong social welfare provision to guarantee living standards.

The ETUC's stand on decent work is not limited to Europe. Achieving decent work is a global aspiration, since bad wages and conditions in one part of the world automatically undermine workers in other areas.

Some argue that Europe can only compete in the global market through cutting wage rates and working conditions to the level of developing nations: a downward spiral with potentially catastrophic consequences for workers around the world. The ETUC totally rejects this approach. Europe can only improve its competitiveness in the world by creating a knowledge-based economy with a skilled workforce and high quality jobs.

These objectives apply to all workers: women and men, salaried or self-employed, in the formal and informal economies, the private and public sectors, and in all economic activities including manufacturing, agriculture, office work, agency or homeworking.

According to the ILO: “Decent work sums up the aspirations of people in their working lives” - aspirations regarding opportunity and income, rights and recognition, family stability and personal development, fairness and gender equality.

The struggle for decent work

The full involvement of the social partners is crucial to achieving decent work. Strong trade union organisation in the workplace, collective bargaining between workers and employers, and the right to information and consultation, enabling people to influence the way their work is organised, should be backed up by adequate social protection and legal standards.

In the framework of the European social dialogue, the social partners have concluded autonomous agreements on telework (2002), work-related stress (2004) and harassment and violence at work (2007), as well as frameworks of actions for the lifelong development of competencies and qualifications (2002), and gender equality (2005).

However, the recent growth in precarious jobs has served to erode decent work in Europe, for example through insecurity, anti-social working hours, low pay and lack of training investment. The ETUC has repeatedly expressed its alarm at rising levels of poverty and inequality between and within EU Member States, and between men and women, in many cases as a result of poverty wages and the gender pay gap. At its Congress in May 2007, the ETUC called for a fair living wage for all. Migrants must not become second class workers nor be used to depress wage levels.

Corporate Social Responsibility has a role to play in encouraging employers to raise standards, but should not replace negotiated agreements and legally binding rules.

The ETUC endorses the EU's core principles laid down in Chapter IV of the Charter of Fundamental Rights, on Solidarity. These cover:

- Workers' right to information and consultation within the undertaking;
- Right of collective bargaining and action;
- Right of access to placement services;
- Protection in the event of unjustified dismissal;
- Fair and just working conditions;
- Prohibition of child labour and protection of young people at work;
- Reconciliation of family and professional life;
- Social security and social assistance.

Furthermore, the ETUC demands that all partnership and trade agreements between the EU and other regions should include a social dimension. It is through trade negotiations that the EU can best use its weight to promote decent work and fundamental rights. In its multilateral and bilateral relations, the EU should be promoting the United Nations Millennium Development Goals.

May 2006
European Commission Communication on <em>Promoting Decent Work for All</em> is welcomed by the ETUC.

March 2007
At the EU Tripartite Social Summit, the ETUC steps up pressure for decent work and fair wages.

May 2007
European Parliament adopts report on Promoting Decent Work for All.

June 2007
G8 leaders give their support to the ILO Decent Work Agenda and call for the implementation of internationally recognised core labour standards.