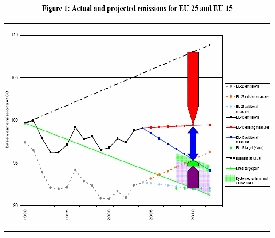 The ETUC's social priorities include maintaining a healthy environment for working people and their families. Trade unions have a duty to take an active part in tackling the problems caused by climate change.
This issue is not longer the domain of environmental experts. It affects citizens' rights and democracy, and must be addressed also at the level of social dialogue and collective bargaining.

The facts about climate change

Over the past 100 years, global mean temperatures have increased by 0.7°C, and in Europe by even more: about 1.0°C. the 1990s was the warmest decade for the past 150 years [[ Source:European Environment Agency ]], with some of the hottest years ever recorded. If no action is taken and the trend continues, temperatures are likely to increase by anything from 1.4 to 5.8°C by 2100, with larger increases in Eastern and Southern Europe. In Mediterranean countries, summer rainfall could be 20-40% lower by 2080.

There is, by now, a mass of evidence and a very broad consensus that this process is due to human activity, and principally the emission of greenhouse gases. These gases build up in the Earth's atmosphere, trapping the sun's heat.

There are six main greenhouse gases:

If this warming persists, it will influence water availability, agricultural productivity and biodiversity, and lead to a growing number of extreme weather events such as hurricanes, forest fires and floods.

Mounting sea temperatures are melting sea ice in the arctic regions - endangering the wildlife that lives on it. Scientists from the British Antarctic Survey predict polar bears could be extinct within 50 years. As water levels rise, they will flood vast areas of low-lying countries like the Netherlands.

It is widely predicted that exceeding a 2°C increase in global temperatures would constitute the 'tipping point', when warming would bring major and irreversible changes to ecosystems, food production and water supply. But to avoid reaching this point will mean cutting global emissions by up to 50% by 2050, say experts - much more than the 5% developed countries are already committed to.

The cost of climate change

The recent report by former World Bank economist Sir Nicholas Stern for the UK government predicted that extreme weather could cut global GDP by up to 1%. A 2-3°C rise in temperatures could reduce global economic output by 3%, increasing to 10% if temperatures rise by 5°C. In the worst case scenario, global consumption per head would fall by 20%.
These figures are in line with estimates from the United Nations Intergovernmental Panel on Climate Change (IPCC). Few scientists have been able to put a monetary value on the cost of climate change, but Cambridge University's PAGE 2002 model predicted damage amounting to €74 trillion if governments pursue 'business as usual' over the next two centuries.

The cost of achieving deep cuts in emissions

Costs will be incurred as the world shifts from a high-carbon to a low-carbon trajectory. But there will also be business opportunities as the markets for low-carbon, high-efficiency goods and services expand. The Stern Report estimates the annual cost of stabilising concentrations of CO2 equivalent in the atmosphere at 500-550ppm (parts per million), in order to keep below the 2°C goal, at around 1% of GDP by 2050 - a level that is ‘significant but manageable'.

Moreover, much of the investment needed to combat climate change is recoverable. For example, savings on healthcare and air pollution controls could cover 50% of the cost of meeting Kyoto targets, says one estimate.

The Kyoto Protocol to the UN Framework Convention on Climate Change (UNFCCC) was signed in December 1997 and came into force on 16 February 2005. It binds the EU 15 and most of the 10 newer Member States to make 8% cuts in their emissions, compared with 1990 levels, by 2008-2012.
The recent emissions data (2004) show that the EU collectively, and a large number of Member States, are not on course to meet the Kyoto reduction targets.
Meanwhile, the international community is still negotiating on the direction of the Kyoto Protocol after 2012, but progress is very slow.

The ETUC believes that climate change offers a potentially positive opportunity to create employment in the new industries and technologies needed to meet the challenge.
Environmental innovation can foster job creation in Europe, while supporting sustainable development around the world.

Friends of the Earth Germany's Environment and Employment 2006 report estimates that the environmental sector employs 1.5 million people in Germany alone: 3.8% of the active workforce. This figure could double by 2020 if industry exploits its full potential.

The Stern report urged the creation of 100,000 new jobs through investment in green technology.

Eco-industries are growing at a rate of some 5% annually in the EU. By 2010, it is estimated that the global market for environmentally friendly products and services will be worth around €700 billion.

The ETUC calls for an ambitious EU strategy

The ETUC sees climate change as one of the most serious threats the planet faces. It has called for an ambitious European policy that demonstrates solidarity with countries in the south in need of development, that are also the chief victims of climate change. It calls on the European Commission and Member States to agree urgently on new targets for emissions cuts in the EU after 2012, without waiting for international accord.

The ETUC is calling for a reduction of around 25% in EU greenhouse gas emissions by 2020 and around 75% by 2050, in line with the conclusions of the Environment and European Councils of March 2005. Efforts on this scale by the wealthy countries are unavoidable if poorer countries are to develop in the future.

In October 2006 the ETUC Executive Committee adopted a resolution setting down essential elements for a future EU climate change policy, including:

- Measures should be extended to cover all greenhouse gases and all sectors, including aviation, road and maritime transport.

- The EU must continue to put pressure on developed countries that have not signed up to the Protocol - notably USA and Australia - and find ways to involve developing countries in the process.

- The burden must be shared fairly between all the different sectors, including not just manufacturing but also residential and transport, where emissions are rising sharply.

- Research and innovation must be strengthened, to speed up technological progress.

- New strategies for sustainable transport must be coordinated at EU level, with priority for environmentally friendly projects such as waterways and combined road-rail links, possibly financed by taxes on civil aviation or maritime shipments.

- The adoption of legislation aimed at limiting CO2 emissions from new cars.

- A European strategy for the sustainable mobility of workers, within company mobility plans.

- Stepping up efforts to diversify energy sources, and especially renewables (in line with the European Parliament's call for 20% of energy to come from renewable sources by 2020).

The radical changes needed will also offer new opportunities, in the view of the ETUC. For example, less dependence on natural resources can be coupled with more intensive use of labour. More research is needed on the impact of climate change on employment, to ensure the right policies are adopted.

Workers and their representatives must be involved in the negotiation and implementation of energy and climate policies within and across sectors, in companies and workplaces, at national and EU level, and through European Works Councils (EWCs) and sectoral social dialogue committees.

- making 'social transition towards a low-carbon economy' part of the mandate of the Commission's Restructuring Taskforce;

- Revising the European Works Council Directive and guaranteeing workers the right to information, consultation and participation on environment-related issues at EU level.

The ETUC welcomes the planned Green Paper on adaptation to climate change and calls for it to highlight populations and jobs that are especially vulnerable.

In February 2007, the ETUC is holding a major conference on Jobs in a low-carbon Europe, in cooperation with the European Commission, a number of Member State environment ministries and other partners, at which it will present the results of a research study on the impact on employment of climate change and climate change policies.