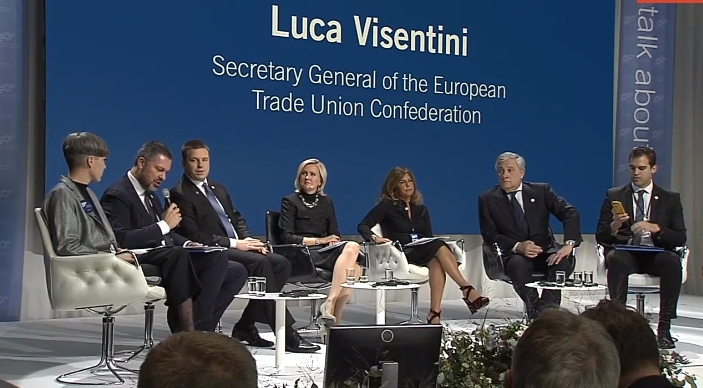 On behalf of the European Trade Union Confederation, I would really like to thank Prime Minister Stefan Löfven and President Jean-Claude Juncker for having organised this summit, which is extremely valuable in bringing together all EU leaders to discuss putting the social dimension back on track in the European Union.

This has not been the case in recent years. Because of the crisis, economic issues only were at the core of European decisions, particularly fiscal discipline and public budget constraints.

When our Union was founded, and then enlarged to new member states, the social market economy and the European social model were fundamental values, while upward convergence, integration and cohesion were promised to people.

The austerity policies we have faced so far have led to slow recovery and yet insufficient improvements in unemployment levels and employment rates. But no significant convergence, integration and cohesion has taken place.

On the contrary, countries and regions are still lagging behind, youngsters and older workers struggle to find and retain a job, labour markets are fragmented and a large number of the new jobs created are precarious, and outsiders don’t enjoy the same level of protection as insiders, while insiders are at risk of losing their rights.

Inequalities in the EU reached the level of the US, wages were depressed together with productivity, and wage gaps and divergences between countries and sectors are unacceptably high, thus undermining the potential of the single market.

Social dialogue and collective bargaining, the essential prerogatives of social partners, have been under attack and often dismantled, as happened to workers’ rights and social protection systems.

It’s not about being pessimistic or catastrophic, it’s about not underestimating the role that unemployment and underemployment, poverty and social exclusion, have played in pushing populism, discontent and mistrust in the European Union.

The responsibility of all of us is to provide people with convincing and concrete solutions to the problems in their daily lives.

The three themes indicated for discussion in this summit (access to the labour market, fair employment and working conditions, supporting transition) are important ones.

Active labour market policies for youth, long-term unemployed and disadvantaged people; investment in skills and competences, while ensuring equal treatment and decent conditions of work and life; accompanying workers in facing the challenges deriving from globalisation, digitalisation and climate change: all this should be at the core of a renewed European social policy.

But it can be achieved only if two conditions are met.

The first is a different macroeconomic policy, based on solidarity; on public and private investment, particularly in innovation and human capital; on a balance between exports and internal demand; on smart, realistic and flexible rules; on a European economic governance that must also be social, to revive that social market economy we have lost.

The second condition is to re-establish our European social model, by reaffirming and reinforcing workers’ and citizens’ rights, social protection systems, and social dialogue and collective bargaining.

This is what the European Pillar of Social Rights is about.

That’s why we are convinced that the Social Pillar will not deliver if it’s not framed in economic governance, in the European Semester, and if it’s not supported by a stronger EU Budget.

That’s why we are convinced that the Proclamation of the Pillar must be followed by an Action Plan for implementation, made of legislation and concrete initiatives.

I want to tell you that European workers are very grateful to President Juncker for having launched the Social Pillar, and to you Prime Ministers and Heads of State for being committed to proclaiming it today.

It’s a historic moment for Europe, that will be remembered.

So please don’t dissipate this potential by discussing the usual old questions: if we need more Europe or more Member States, more integration or more subsidiarity, more or less regulation.

We trust, you will be ambitious and determined.

Be sure that trade unions, with all social partners, will be on your side to deliver.

17.11.2017
Speech
In European pillar of social rights
It’s a historic moment for Europe, that will be remembered. This is the time for unity and solidarity, this is the time to build up the future of Europe, a future that must be prosperous and social.
Print