The European Commission this week proposed a “Services Package” of measures aimed at “making it easier” to provide services across Europe.

European trade unions note that the Services Package shows improvements, but does not address some fundamental problems raised by the unions, including in our December red card.

“Thanks to our action, the European Commission addressed some of our concerns on the legislation on posted workers,” said Thiébaut Weber, ETUC Confederal Secretary. “But it doesn’t make this proposal a ‘fair internal market package’. We will keep up the pressure on EU institutions.”

“The European Commission’s proposals for an EU services card is still far from achieving a better and fairer European services market for workers. To avoid European services workers being played against each other, we need a real and substantive EU social action programme that ensures a fair internal services market,” said Oliver Roethig, Regional Secretary of services trade union UNI Europa.

“The proposed e-services card does not meet the challenges of a more social Europe and tries to 'solve' a problem that doesn’t exist. Workers of the construction industry are extremely worried that the proposal might lead to increased social dumping in the sector. Without fundamental changes, the EFBWW will ask European legislators to reject the proposal,” said Sam Hägglund, General Secretary of the European Federation of Building and Woodworkers (EFBWW).

The EU must eliminate social dumping, guarantee that employers cannot evade national and EU obligations towards their employees, and ensure that governments cannot dilute workers’ rights.

Trade unions still have concerns about the need for the proposed regulation and its impact on cross-border service provision in the internal market. The proposal is based on false and incorrect assumptions that there is low cross-border mobility within the construction industry and insurance creating a barrier to cross-border activities. Despite requests from them, the services card proposal has been drawn up and presented without proper consultation with employers and workers’ organisations in the construction and finance industries.

We have specific concerns about the monitoring and control of e-services card holders. In view of current differences in the capacities of enforcement institutions in Europe and the quality and effectiveness of the Internal Market Information System (IMI), the introduction of the e-services card, instead of facilitating genuine cross-border mobility, could undermine host-country control and enforcement tools and lead to more cross-border social fraud and dumping. There are also questions about the impact of the proposal on the quality of insurance tools in Europe. Trade unions in the finance sector point out that it is difficult to standardise key information across the EU and impose a single format on insurance documents, including reports on clients’ claims. This could lead to crucial information being omitted.

There are also concerns about other sectors, such as industrial cleaning, which will be affected by the proposal. 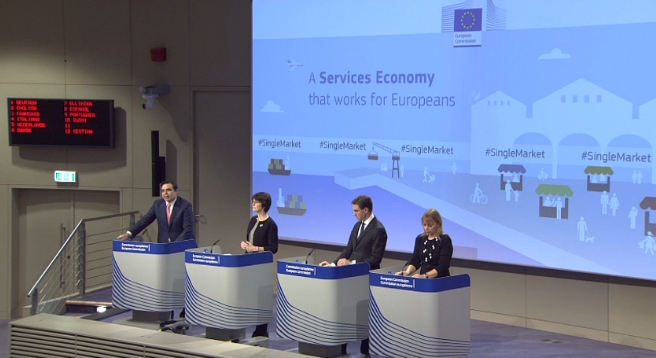