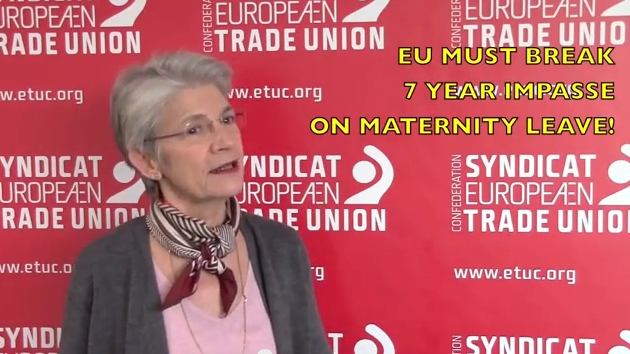 To mark International Women’s Day the ETUC is
• Highlighting the need to raise European maternity leave rights to international standards, and
• Urging EU Governments to reach agreement on a proposal that has been blocked since 2008!

“It is an absolute scandal that EU Governments have been blocking an improvement in maternity leave since 2008” said Bernadette Ségol, General Secretary of the ETUC. “They need to act now to save this shameful situation.”

“18 weeks maternity leave is an international standard, but EU Governments have totally failed to agree it. Spending unimaginable amounts of money to save the Euro has not been as difficult for them as improving women’s rights. It says a lot about the values of today’s European Governments.”

“Better protection for pregnant workers is needed for health and safety reasons, as well as to stop the rising tide of unfair dismissals of women when they inform their employer of their pregnancy or return to work after maternity leave.”

In 2008 the European Commission proposed to raise it to 18 weeks, the standard of the UN International Labour Organisation. Since then the European Parliament and Council have failed to agree on how much to increase maternity leave!

The European Commission said in December it will withdraw the proposal if agreement is not reached within 6 months. It has said it will return with a ‘more modern’ alternative, but it is widely believed that such a proposal would not be legally binding and would consequently have little or no effect. Now the European Parliament is making a new attempt to reach a deal.

An 18 week fully paid maternity leave would ensure higher standards for women in countries including Austria, Belgium, Croatia, Finland, France, Germany, Greece, Luxembourg, Netherlands, Slovenia, Spain and Sweden. In only 2 countries – Croatia and Germany – would maternity leave have to be increased by as much as 4 weeks in order to reach the 18 week international standard.