The social partners of the Union for the Mediterranean - Joint statement 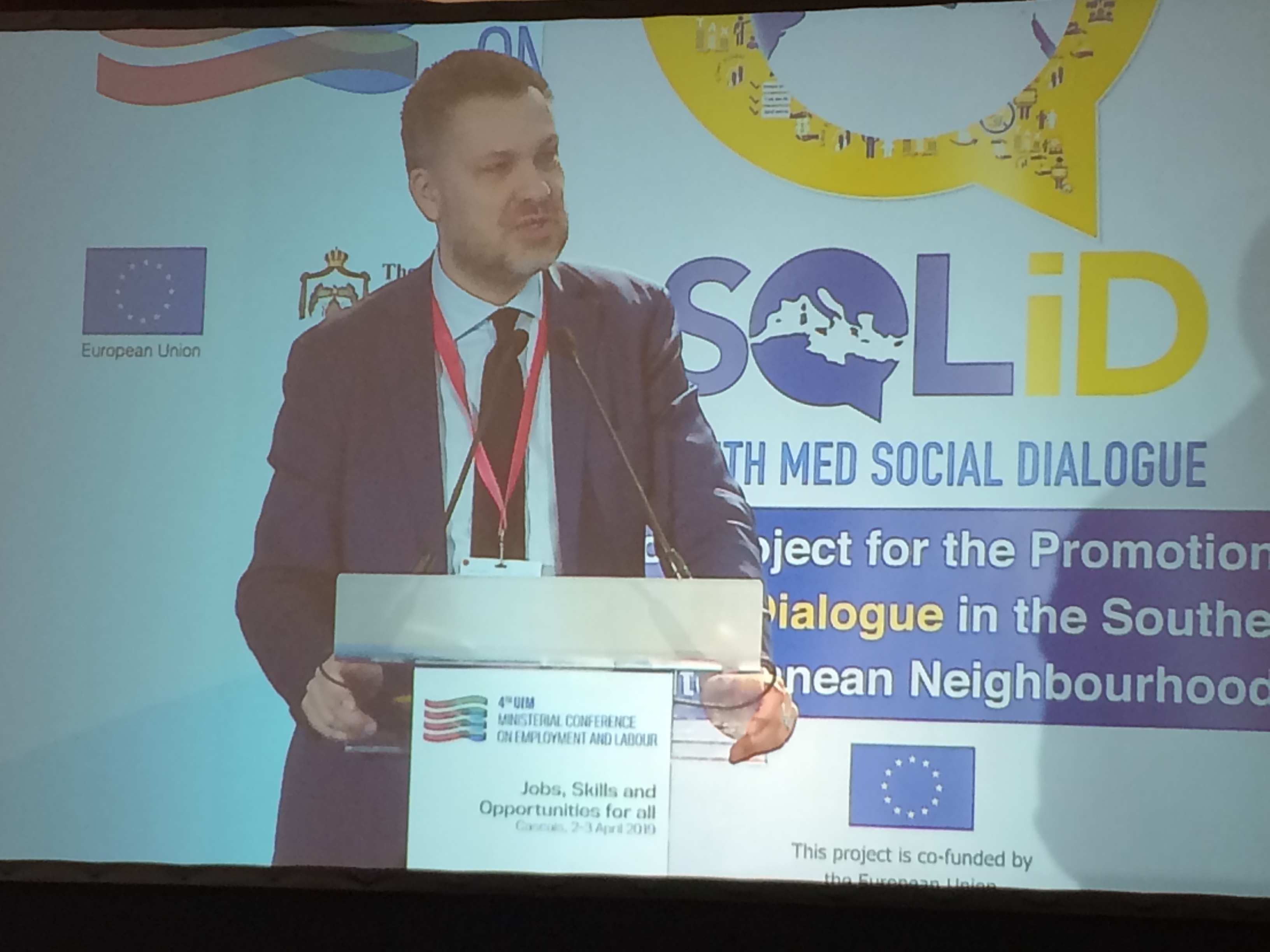 The social partners of the Union for the Mediterranean

The social partners on both sides of the Mediterranean particularly welcome their first participation in the Ministerial meeting itself, which enabled an exchange of views between social partners and Ministers. They see, in this initial participation, the explicit recognition of the added value of Social Dialogue, which is also enshrined in the constitution of the ILO and the Treaty on the Functioning of the European Union (TFEU).

As stated in their Joint Declaration on Social Dialogue of 26 September 2016, presented in the margins of the 3rd Ministerial Conference (Jordan, Dead Sea), the social partners wish to contribute actively and positively to the establishment and development of strong, independent and effective social dialogues, at the bi- and/or tripartite levels in the 43 UfM member countries. The social partners intend to increase, broaden and strengthen their capacity for autonomous action and their involvement in the decision-making processes within the member countries, in the two regions, and in the context of the activities carried out at the UfM level.

With this objective in mind, they highlight two initiatives carried out following their Declaration.

On the one hand, the pilot project for the Promotion of Social Dialogue in the Southern Mediterranean Neighbourhood - SOLiD - implemented by the social partners of the southern shore of the Mediterranean affiliated with the Arab Trade Union Confederation and BUSINESSMED. The project was aimed at developing the capacities of employers’ organisations and workers’ unions from three target countries (Tunisia, Morocco and Jordan).

The social partners of the UfM from the northern shore welcome the progress achieved in this area and note the conclusions of the project as well as the Charter of Social Dialogue in the Southern Mediterranean to be signed by the ministers of the three target countries of the SOLiD project, namely the Tunisian Minister of Social Affairs, the Jordanian Minister of Labour and the Moroccan Minister of Labour and Professional Integration. This is an important step in strengthening social and civil dialogues with a view to better functioning labour markets, the creation of decent jobs and the strengthening of stability and cohesion in the respective countries. Effective social dialogue at all appropriate levels plays a crucial role in dealing with the challenges of competitiveness, growth, job creation and social cohesion in the southern Mediterranean region. The northern partners stress the importance of clearly distinguishing the role of the social partners, in particular with regard to their autonomous collective bargaining, which is different in nature from that of the broader dialogues between governments and civil society, since these two types of dialogues follow a logic and legitimacy of their own.

The social partners also call on the European Commission, the Member States and the governments of the South to support - including through the funds necessary for this purpose - the meaningful widening and deepening of the project approach in other countries in the South in a new cycle, while taking into account the lessons of SOLiD.

On the other hand, the “European Partnership for the Integration of Migrants in the Labour Market” project, carried out on the initiative of the social partners of the northern shore of the Mediterranean. Integration can only be effective if all the stakeholders concerned play their role: European Union institutions, local public authorities and national authorities, social and economic partners, and civil society organisations. The partnership for integration signed by the ETUC, BusinessEurope, SMEunited, CEEP, Eurochambres and the European Commission in December 2017 sets out basic principles for the integration of refugees into the labour market, including by providing support at the earliest possible stage, ensuring that integration benefits refugees as well as the economy and society as a whole, and adopting a multi-stakeholder approach.

The social partners also note the Ministerial Declaration of this 4th UfM conference. In particular, they note the following points: a reminder of the crucial role played by a continuous bi- and tripartite social dialogue and collective bargaining to resolve the challenges of democracy, growth and social justice in the region; the commitment to achieving the objectives of Agenda 2030; the favourable reception of the conclusions of the 106th session of the ILO in 2017 and the framework for action that they contain with a view to universal and effective respect for and the promotion and realisation of fundamental rights at work, as well as of other initiatives underway at the international level, in particular in the context of the ILO (including the fight against violence and harassment at work) and the United Nations (in particular the Global Compact on Refugees and the Global Compact for Safe, Orderly and Regular Migration) and the emphasis placed on the creation of a monitoring process with a view to transposing the 2016 Declaration into actions at the national level.

The social partners reiterate on this subject their conclusions, adopted on 11 October 2017 in the context of the 3rd Social Dialogue Forum of the UfM, in which they “called on Ministers to fulfil their commitment in their Declaration of the Employment and Labour Ministerial Conference, to boost the capacity of social partners’ organisations and of social dialogue institutions, as well as the culture of social dialogue, by developing sound dialogue practices both in companies and in sectors”.

More generally, the social partners had stressed, while recognising the diversity of national situations, the need to translate the relevant statements from governments and social partners at the UfM level into concrete actions, in order to respond to the realities and bring added value to the social partners not only at the level of the “Euro-Mediterranean” region, but also at the national level in the member countries of the UfM, taking into account the significant differences that exist between the two regions, including concerning the functioning of regional cooperation within each of the two regions.

The social partners also stress the fact that the continuing challenges in the region go beyond those relating to unemployment, in particular with respect to young people, difficulties for women in accessing work as well as refugee flows and migration, to include other issues such as the need for a new investment agenda, for a co-development agenda and the creation of sustainable jobs, which are issues with a direct or indirect impact on employment and labour.

The EU and the governments of the southern shore therefore need to promote real co-development that would benefit both regions, while taking into account their economic weight, to help strengthen the political, economic and cultural relations between them and promote respect for human rights, social inclusion, sustainable development and peace. The objective should be to strengthen economic growth and competitiveness (which are crucial for the success of companies), the creation of stable and high-quality jobs, and fair taxation, social cohesion and tackling poverty, inequality and discrimination, as well as to consolidate the building of democracy throughout the region. The European Union must further commit itself to promoting economic and industrial recovery on the southern shore, in particular to improve the confidence of economic and financial operators. As neighbouring regions, the European Union and the countries of the southern Mediterranean are linked and affected by similar global trends and challenges.

With regard to their bipartite activities on the bi-regional level, the social partners intend to continue their exchanges in the coming years in the context of the (4) priorities and (2) issues identified in their 2016 declaration. They therefore call on the European Commission, the co-presidency and the UfM Secretariat to take the necessary steps for the organisation of a future UfM Social Dialogue Forum in late 2019/in 2020, while prioritising the principle of rotation between European countries and those in the southern Mediterranean. The Social Dialogue Forums organised in the framework of the UfM should continue, with the objective of sharing information and good practices on the state of progress of social dialogue in the UfM countries, and of exchanging views on current and future priorities.

BusinessEurope is the leading advocate for growth and competitiveness at European level, standing up for companies across the continent and campaigning on the issues that most influence their performance. A recognised social partner, we speak for all-sized enterprises in 35 European countries whose national business federations are our direct members.

Established in 1961, CEEP gathers enterprises and authorities from across Europe, both public and private, at national, regional and local level, which are public employers or providers of services of general interest.

ETUC (and the liaison committee Eurocadres/CEC)

The European Trade Union Confederation was founded in 1973 to promote the interests of workers at European level, and to represent them in the EU institutions. Its membership now includes 89 national trade union confederations in 39 countries, plus 10 European trade union federations.

ATUC is a regional organisation of the International Trade Union Confederation (ITUC). It was founded in 2014, with a mandate to defend fundamental freedoms and trade union rights, to combat discrimination against women and migrants, and to foster the implementation of international standards in the 16 Arab countries. ATUC is made up of 20 trade union confederations in 13 countries.