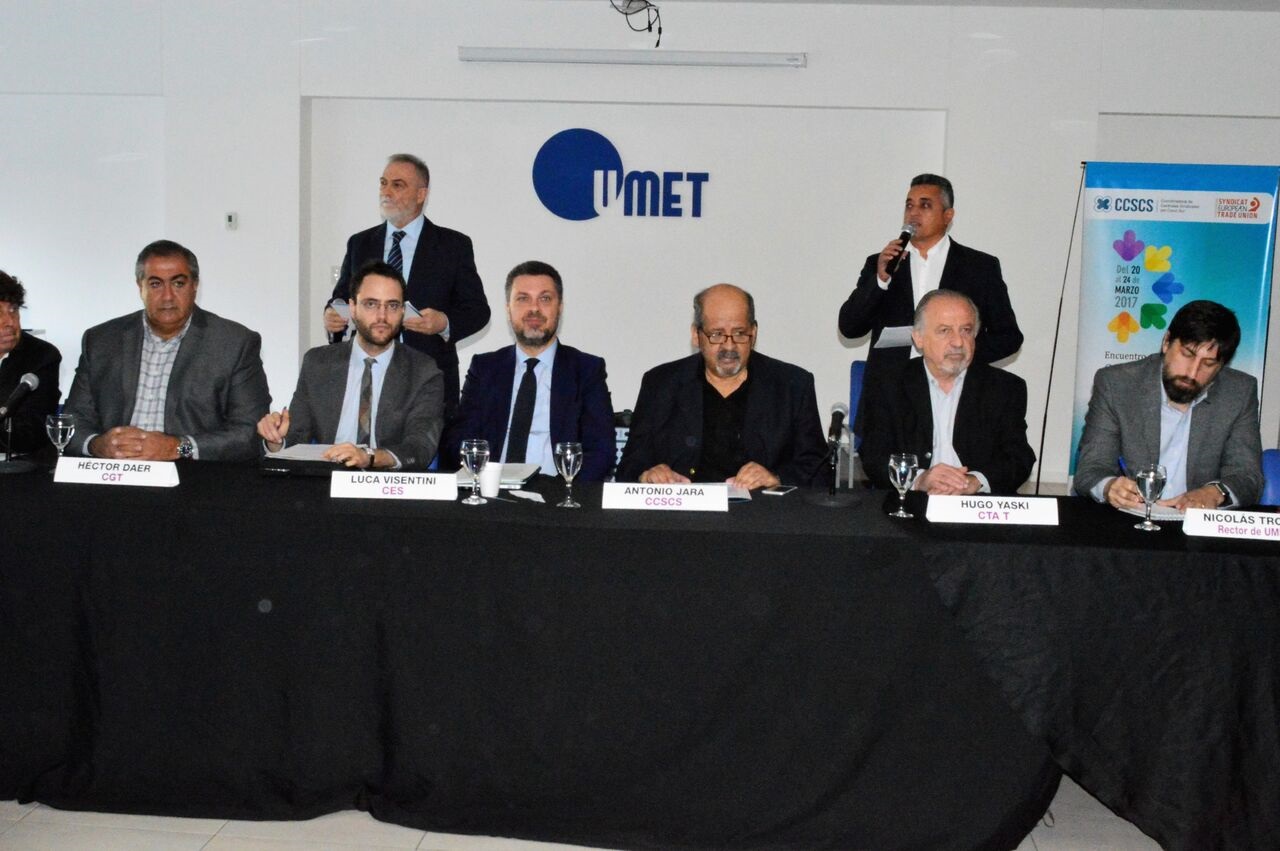 Before the negotiations taking place in  Buenos Aires between 20 and 24 March 2017,  as part of the Bi-regional Negotiating Committee (CNB) discussions for establishing a Bi-regional Association between the Southern Trade Block (Mercosur) and the European Union (EU), as representatives of the trade union movement, we have set out to the authorities on both sides our main concerns and requirements, to ensure that the negotiations progress to create an agreed, true association to strengthen political, social, economic and cultural relations between the two regions, able to promote respect for human rights, decent employment, sustainable development and democratic values, so that it does not merely become a free trade agreement.

We demand to know immediately the content of the market access offers made in terms of goods, services, investment, public procurement and intellectual property, so that the greatest possible transparency is given in information to us as the producers involved, with the undertaking that we will respect the confidentiality clauses of the agreement.

We require institutional, real and effective consultation by the negotiating teams with the representatives of civil society, particularly the European Economic and Social Committee (EESC) and the Mercosur Economic and Social Consultative Forum (FCES), as well as with other representatives of societal partners. In particular, we demand respect for institutional and effective dialogue, so that the union movement in both regions, represented by the CCSCS and ETUC has a formal part to play and is listened to in the negotiating sessions. We also require that social dialogue is respected and made effective within the national environments.

We require complete exclusion of public services from the package of market access agreements in terms of services, with particular emphasis on health and education, since such sectors are not commodities but public goods, access to which forms part of the human rights of our people.

We demand exclusion of any binding clause on protection of investment and transfer of jurisdiction in the event of any conflict between foreign investors and nation States, since these are sovereign prerogatives of each of the nation States.

We ask for restricted access to government purchasing on concession of specific and individual preferences in some sectors, goods and services, but always conditional on the terms of national legislation and guaranteed respect for social rights and duties.

We demand exclusion from the clauses on extending patents in the section on intellectual property, since, far from promoting innovation in new products, these limit access to drugs and medicines and prejudice the living conditions of the people.

We require that each and every migrant worker and his or her family members are guaranteed and can exercise the right to migrate or not, to remain and return freely, independent of their nationality; that they have the right to the same assistance, information, protection and equal rights and conditions of employment recognised for citizens of the country in which they are working; and in particular, that migrant workers are guaranteed the right to social security (ILO agreements 97 and 143).

We request the inclusion of clauses in the agreement to oblige national and multi-national companies to comply in their working practices with the ILO's “Tripartite Declaration of Principles concerning Multinational Enterprises and Social Policy” and the “Guidelines for Multinational Enterprises of the Organization for Economic Cooperation and Development” (OECD) through national points of contact, as well as the “Guiding Principles on Multinational Businesses - Protect, Respect and Remedy”, and the United Nations Agenda 2030. The Agreement must also respect the European Social Charter and the MERCOSUR Workers’ Rights Declaration (2015) and the Global Framework Agreements for the sector.

We recall the consensus achieved at the negotiating table, before it was interrupted in 2005, with respect to the following points set out by the unions:  i) inclusion of a section referring to the fundamental ILO agreements in general, and to decent employment in particular, including commercial penalties if these agreements are not respected; ii) creation of a Mixed Consultative Committee consisting of the EESC and FCES; iii) recognition in future agreements of a “Workers’ Forum” for specific topics in the world of work.

We reiterate and ratify our position as stated in the “Declaration on Negotiations between the European Union and Mercosur”, on 03 June 2016, jointly endorsed by the ETUC and the CCSCS, setting out the vision and position of the trade union movement in both regions on the content and form of negotiations between the two blocks (attached).

The ETUC and CCSCS will continue to defend workers’ claims and also the principle that relations between the European Union and Mercosur should contribute to build development models that are more balanced in economic terms, with greater cohesion and social justice, and which guarantee respect for the environment.

As on so many other occasions, the organised trade union movement will be up to the task in hand. We hope for the same from our governments.