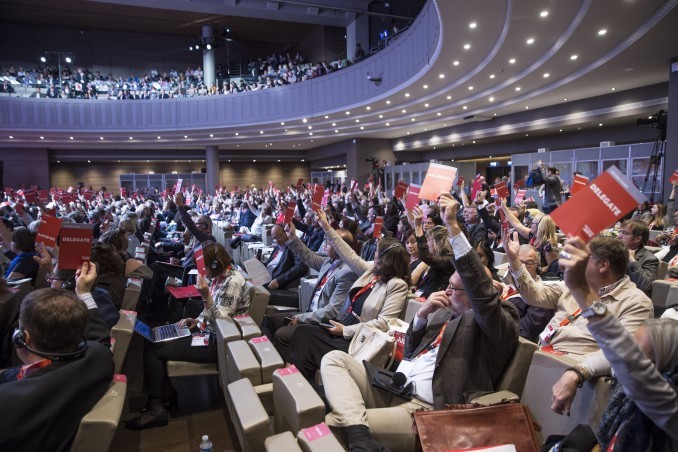 Since 2013, the EU has been negotiating the Trade in Services Agreement (TiSA) plurilaterally with 23 other WTO members with the aim of further liberalising trade in services by the means of reaching an international agreement that goes far beyond the existing provisions of the General Agreement on Trade in Services (GATS). By the goals set out in the EU negotiating mandate, this agreement should be “comprehensive and ambitious”, “apply in principal to all sectors and modes of supply" and “bind the autonomous level of liberalisation”. Yet, negotiations are conducted in total secrecy, behind closed doors.

In the beginning of June and July 2015, however, Wikileaks published the most comprehensive compendium of secret documents from the TiSA negotiations ever, revealing the full extent of the planned agreement for the first time. The leaked documents included the draft core text of this new agreement as well as several annexes including on domestic regulation, movement of workers and specific sectors such as maritime and aviation transport. First analyses of these documents make it apparent that TiSA might have significant detrimental implications on the working and living conditions of large parts of the population, including those of workers in Europe.

It appears that so-called ratchet and standstill clauses are to be incorporated into TiSA with the effect of locking-in a certain degree of liberalisation and confining the public policy space to that of ever increasing liberalisation. In sectors affected by such clauses, TiSA would make it impossible to return to a decreased level of liberalisation. The re-municipalisation of services of general interest that has occurred in recent years would no longer be possible choices of democratically elected governments. A possible incorporation of a so-called Most-favoured-nation (MFN) clause into the core text could bear the risk of bringing an investor-state-dispute-settlement (ISDS) mechanism into TiSA via the back door of other free trade agreements such as CETA or TTIP. More recent information sources confirm even a possible annex on the facilitation of patient mobility being currently under discussion by TiSA negotiators, despite Trade Commissioner’s Malmström reassurance in February 2015 as reaction to a first leaked concept paper by the Turkish party that “under no circumstances, I would ever propose a trade agreement that contained provisions on portability of health insurance”.

One of the key issues of the TISA negotiations are the so-called rules on domestic regulation, which directly relate to important regulations for safeguarding standards. The newly leaked negotiation documents reveal that regulations must be in line with TiSA provisions even if they are non-discriminatory and serve to guarantee fundamental cultural, social or ecological rights. By the same token, regulations must stand a so-called necessity test of being “no more burdensome than necessary”. The objective here is to restrict a government’s room for manoeuvre as far as regulations are concerned, thus potentially putting a downward pressure on labour, social, environmental and consumer standards. This, for instance, would also impact financial services where, in the aftermath of the global financial crisis, it is especially important for more stringent standards to be enforced. Yet, the negotiation documents reveal that even greater liberalisation of the financial markets is envisaged under TiSA. The most recent official withdrawal of Uruguay and Paraguay from the TiSA negotiations in early September can be judged as another indication that states start to see these risks and react to the increasing public pressure.

In light of these alarming recent publications and against the background of the European Parliament currently drafting its recommendations on TiSA, the ETUC Congress urgently calls for the following aspects to be guaranteed in the TISA negotiations:

Negotiations must not take place in secret. Negotiation documents must be published in order to allow the general public and civil society to be informed in good time. We demand the highest level of transparency and involvement of the European Parliament, national parliaments, social partners and civil society organizations.

Every effort must be undertaken to protect public services and in particular no pressure must be brought to bear either in favour of liberalising or privatising public services, nor should a return to the provision of greater – or even wholly – public services be blocked by any ratchet or standstill clause. Public services e.g. health care and social services, education, water and waste services must therefore be excluded from the scope of any trade agreement; this exclusion should apply irrespective of how the services are provided and funded. In this light we ask the European Commission to openly reject the use of negative or hybrid listing in any trade agreement.

Under no circumstances should possible means of regulation be restricted where this leads to a lowering of national labour, social, environmental and consumer standards. The member states’ right to regulate and to introduce new regulations must not be compromised. Between two services that meet the same use, member states must be allowed to favour the one furnished in respect of labour standards.

European data protection standards, as provided for in the envisaged EU General Data Protection Regulation, must not be compromised. Data collected by foreign businesses must therefore be processed in situ and in line with local data protection laws.

Any establishment of temporary free movement of workers must under no circumstances make it possible to undermine labour and social law and collective agreement provisions of the host country and respect the obligation to proceed with a preliminary analysis of the labour market. Possible negotiations on mode IV must be bound to functioning cross-border cooperation in administration and justice in labour and employment law issues as a precondition to guarantee the full application of collective agreement wages and working conditions. It must be possible to make any lack of enforcement by the contractual parties subject to dispute settlement including sanctions.

Any dispute settlement mechanisms foreseen in TiSA – may it only be temporary before a possible multilateralization of the agreement under the WTO – must take into account the current critics on ISDS, and more especially must not offer private investors the privilege to challenge democratically chosen policies without strong social clauses allowing to effectively sanctioning violations of international labour standards at the same time.

If TiSA doesn't meet all these demands, the ETUC calls for its rejection.